What Happens When Hope Is Lost?

“The tiny ripple of hope you set in motion can change the path of someone’s life,” said Dr Shane Lopez, Gallup’s Senior Scientist in Residence and one of the world’s leading researchers on hope when I interviewed him several years ago. They were words that stayed with me, and as I shared Shane’s research and tools around the world, I’ve been privileged to see just how much change these ripples are capable of creating.

Never have we needed Shane’s insights on hope more than we need them now.

Reading our newspapers recently is like waking up in some kind of Orwellian nightmare. Treaties and alliances that stemmed centuries of bloodshed in Europe are being torn up. A man who takes pride in spreading lies, hatred and fear across borders is about to be elected the leader of the free world. And children innocently celebrating a national holiday outside a lolly shop are mown down and killed in cold blood in the name of God.

But perhaps, most dismaying of all, is that while shock is shared and tears are shed, it seems most of us are willing to accept that this is just the fate of our world.

Is this really what we’re willing to settle for? Is this how we want our children to grow up?

“When we choose hope, we define what matters most to us,” Shane told me. 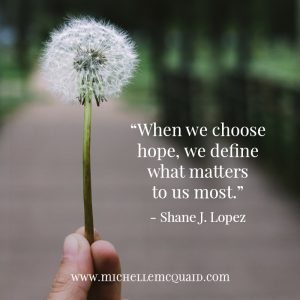 After all, hope was what powered the first African-American man to be elected President of the United States. Hope was what inspired 195 countries to sign the world’s first accord on climate change. And hope is how extreme poverty has fallen for the first time to below ten per cent of the world’s population.

“Hope is created moment by moment through our deliberate choices,” Shane wrote in his best-selling book Making Hope Happen. “It happens when we use our thoughts and feelings to temper our aversion to loss and actively pursue what is possible.”

Yes, at this moment in history it seems that Britain will leave the European Union, that Donald Trump may become President and that terrorists believe killing innocent people is the only way to be heard. But that doesn’t mean we don’t have the power to hope for something different.

You see Shane also taught us that hope is contagious. He suggested that we are each the best chance of spreading hope in the world by:

After all as Shane observed, “How we think about the future – how we hope – determines how well we live our lives.” 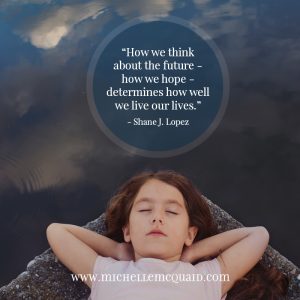 Unfortunately, just when the world most needs his work, Shane recently passed away. And while it would be easy to believe that today the world has a little less hope in it,
Shane himself would tell us to get off the sidelines of life and start spreading more hope. He was a wonderful leader, researcher, teacher, friend, husband and father who will be greatly missed.

I urge you today, in memory of Shane and for the people that you most care for, to create a tiny ripple of hope and help build a future that is better than where we currently find ourselves.

You can savor more of Shane’s work at his site www.hopemonger.com and in his wonderful book Making Hope Happen.