Who Are Australia’s Happiest Workers, And Why?

Who Are Australia’s Happiest Workers, And Why?

Are you consistently thriving at work or lately have you felt more likely you’re just getting by or really struggling? In partnership with Dr. Peggy Kern from Melbourne University and supported by the Australian HR Institute, our team at The Wellbeing Lab asked a representative sample of just over 1,000 Australian workers how their wellbeing was faring. The results are both surprising and helpful when it comes to understanding what workplaces can do to improve their people’s wellbeing.

Of the 19% of Australian worker’s who were consistently thriving:

In addition, 37% of Australian workers demonstrated incredible resilience describing themselves as ‘living well, despite struggle’ and showed no statistically significant difference for job satisfaction or job performance.

As the Australian Productivity Commission begins investigating the economic cost of mental illness, Professor Allan Fels recently suggested that a marked improvement in workforce participation by Australians with a mental illness could help boost the economy by a massive $18.4 billion a year. But what enables Australian workers, whether they are dealing with mental illness or not, to thrive?

The Wellbeing Lab Workplace Survey found that while 40% of C-suite executives report being ‘on top of the world,’ only 11% of administrative staff, and 10% of sales or customer service staff, report that they are consistently thriving. While gender may play a role, it was higher levels of positive emotions, a sense of engagement, and job autonomy that differentiated Australian workers who were consistently thriving.

Improving our wellbeing at work, however, is not a solo endeavor. Workers who were consistently thriving were also more likely to be part of a team who provide a sense of psychological safety and support. They were also more likely to be working for organizations where wellbeing support options go beyond Employee Assistance Programs and the popular three Fs of wellbeing (fruit, fitness and flu shots), to also include the three Ms of wellbeing (meaning, motivation and mentoring).

“It’s important to understand what is helping workers to consistently thrive so Australian organizations can leverage these insights,” said Dr. Kern. “However, what surprised us most in The Wellbeing Lab Workplace Survey results were the high percentage of Australian workers who reported that they were ‘living well, despite struggles’ (37%) versus those who were ‘not feeling bad, but just getting by’ (36%) and those who were ‘really struggling’ (8%).’”

“Typically wellbeing is measured on a single continuum from struggling to thriving,” explained Dr. Kern. “But we have found – and other researchers have previously suggested – that struggling and thriving are related, but separate continuums of wellbeing. For example, there were no statistically significant differences on a number of outcomes, like job satisfaction and performance, between worker’s who were ‘consistently thriving’ and those who were ‘living well, despite struggles’.”

“This suggests that there is an incredibly resilient portion of the Australian workforce who, due to mental or physical illness or other struggle,s may never describe themselves as ‘thriving’ or be rated as having high levels of wellbeing,” cautioned Dr. Kern. “Workplaces need to be careful that in their drive for improving wellbeing they don’t stigmatize those who are struggling, but instead learn from and better support these resilient workers.”

Mindful of the findings in this survey, the Wellbeing Lab Workplace Survey concluded that workplaces can help to improve and sustain the wellbeing of all of their workers by:

Want to see how you’re doing when it comes to your wellbeing at work?  Why not take our free, five minute, PERMAH Workplace Survey at www.permahsurvey.com.

Quick tip: You can save this post to your favorites, so you can access it quickly and easily later! Just click the “Add to Favorites” button to save it forever. You can then find it later in My Toolbox -> My Favorites.
ADD TO FAVORITES
ADD TO FAVORITES

Want an evidence-based wellbeing toolkit? Get our busy-proof ideas and tools so you can truly flourish at work. 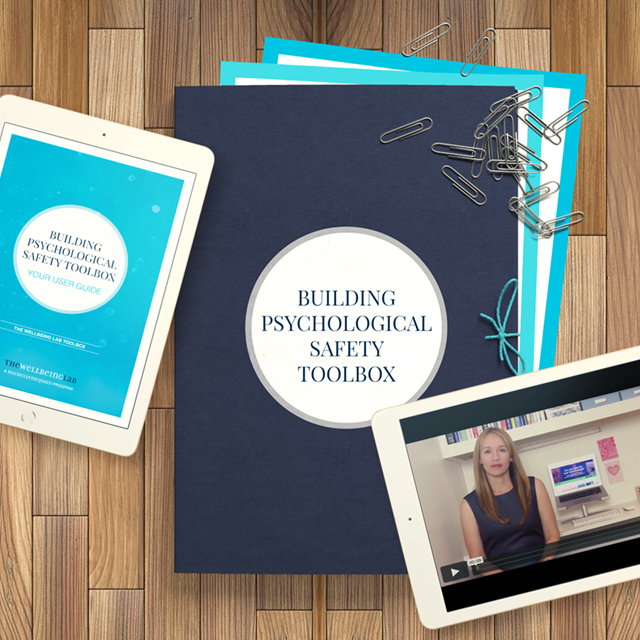 Your practical, evidence-based toolbox for improving psychological safety in teams.